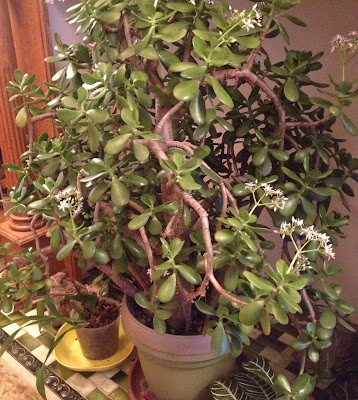 This year let me start off with some good news, because that's certainly been in short supply this year.

What you see here is a flowering jade plant that a sunny summer and considerable attention coaxed into bloom this year.  My mother, who was no gardener, occasionally had one flower in San Diego, but while I've usually had one sitting on a windowsill all winter, I'd never had one bloom for me until last year.  In 2018, however--possibly to balance out my terrible record in keeping orchids alive--I thought I'd try to see what I could do in a systematic fashion. 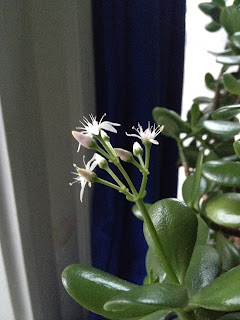 The result was encouraging: three clusters of blossoms, which made me happy.

But this year I hit the jackpot.   I've lost count how many clusters of the white star-like flowers there are.  What's more the plant has been flowering since shortly after I brought it inside in mid-October. The trick seems to be as much sunshine as possible, followed by short days and cooler temperatures.

The cooler temperature business may become harder to come by, given the way the world is rapidly rushing toward climate change on a scale unheard of since humans began walking out of Africa.  That is part of the bad news.  Its corollary is the steadfast refusal of some of the world's leaders to take the problem seriously.  In Canada our federal election in October was lost by the Conservatives, the
one party that didn't offer anything that vaguely resembled movement toward solutions.  The Liberals under Justin Trudeau now have a minority government that at least is levying a carbon tax.  Don't see that going to happen in the US anytime soon...

Which of course brings up the topic of politics to the South of us.  We have had many interesting discussions with American friends about what is going on, and we regularly read the New York Times, the Washington Post and The Guardian (among the advantages of the internet age.)  But the mind boggles at the fact that around 40 per cent of Americans still support Trump.

The differences between the US and Canada are very real, and one of the chapters in my new book Frenemy Nations: Love and Hate in Neighbo(u)ring States is a comparison between them.  They are just one of ten pairs of places that are alike, yet not alike that I consider.  The book is the fruit of decades of travel, observation.... and worry.

That's only one of several projects completed chez nous.  One of the most appreciated this year was the wagon that Lee made for the grandkids. (That's him taking a test drive before it was painted apple green at their request.)  Jeanne (9) and Thomas (7) were out this afternoon with it even though the windchill brought the temperature down to -15 C (or about 5 F).  They get a big kick out of pulling each other around (or letting Grandpa or Grandma pull them) and then coasting down a couple of slopes in neighborhood parks.  Louis (3 1/2) was somewhat reluctantly taking a nap during the outing, so he missed out on the fun, although not on the hot chocolate that everyone had when we came back. 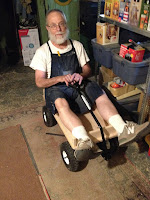 Another one of Lee's projects is also child-friendly.  It's a chest of drawers for a friend expecting her first baby. Also he continues to work on much less practical but far more spectacular creation:  a bench/table/installation that will feature stained glass and carving as an homage to the Cathedral at Chartres.  The guy keeps busy!

He and I had a couple of interesting outings--a few days in Toronto and  a weekend in the Eastern Townships, in particular--but this was the summer and fall of plumbing and excavations. First we had lead water pipes replaced from the city main line, then we had to change the furnace when the old oil-fired boiler cracked, and most recently we had old galvanized pipes in the house replaced by copper ones.  Well, the house was built in 1912, and it's past due for repairs, I guess.

We're not nearly as old as the house, and so far we seem to be wearing better than either the furnace or the galvanized pipes.  At least we haven't had to have anything replaced yet!  In many respects we're just very lucky, not least because the kids still live not far away.  We'll be celebrating during the holiday with them at various times, and we expect to have fun.

But to return to the jade plant story: we hope that your 2020 will be as full of pleasant surprises as the abundance of flowers was this year.  Even the shape of the star-like flower seems to be a good omen, and goodness knows we need them.

Scenes from the last 12 months

Here are a few pictures of what we've been thinking about, some of it pretty low down and dirty! 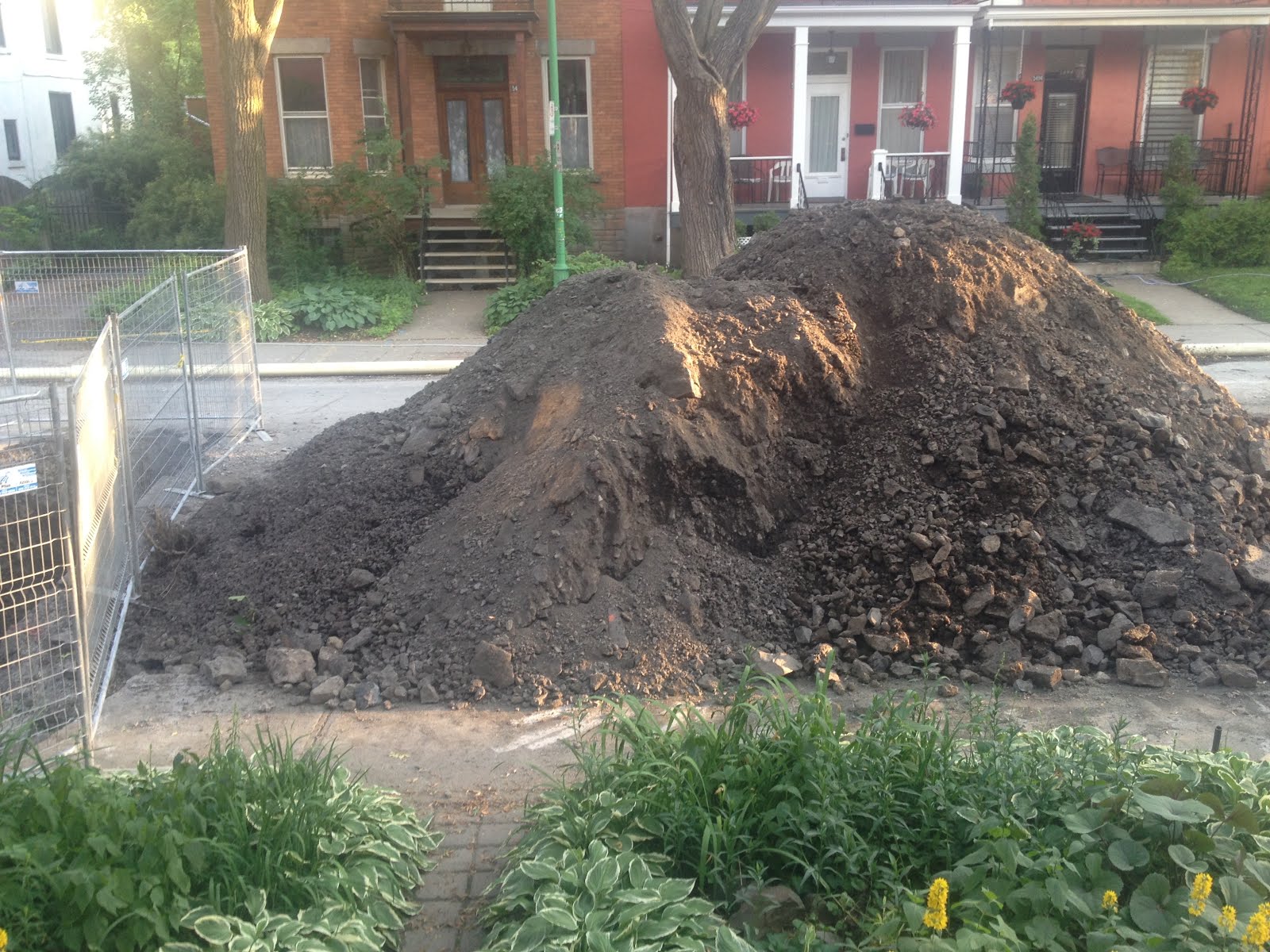 This summer the street was dug up to put in modern water connections. This is the mound of dirt from the excavation in front of our place 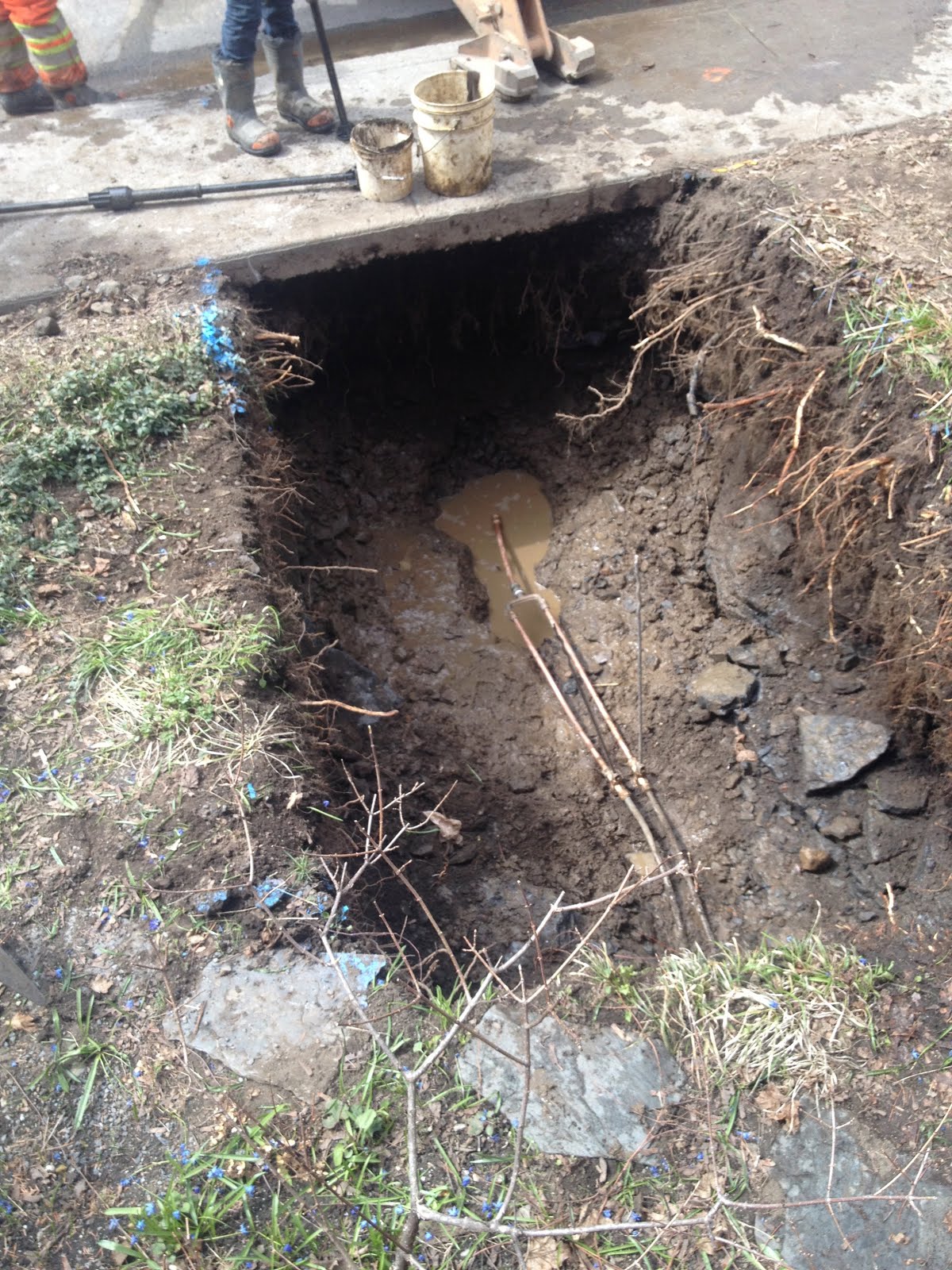 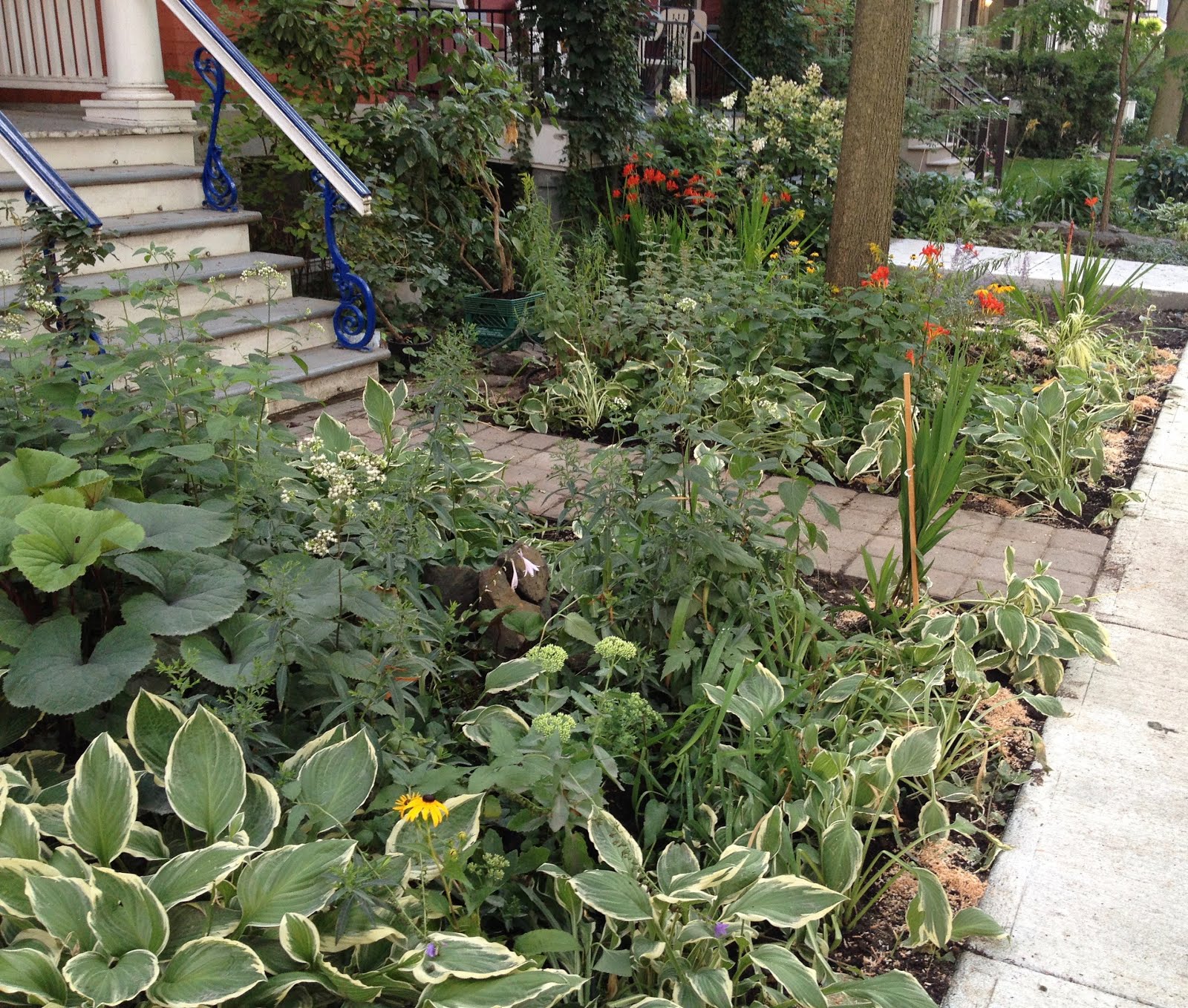 And this is what the garden looked like when the work was done. Of course I took advantage of late summer garden specials to buy some new plants.

Sometimes a weekend away can be as refreshing as a long vacation.

In July we headed to the Eastern Townships where we were lucky enough to join an open house at Glen Villa Gardens, a wonderful place owned and designed by Patterson Webster and her husband Norman. This field was particularly gorgeous.

Frenemy Nations: Love and Hate Between Neighbo(u)ring States Is Published in Ocoober 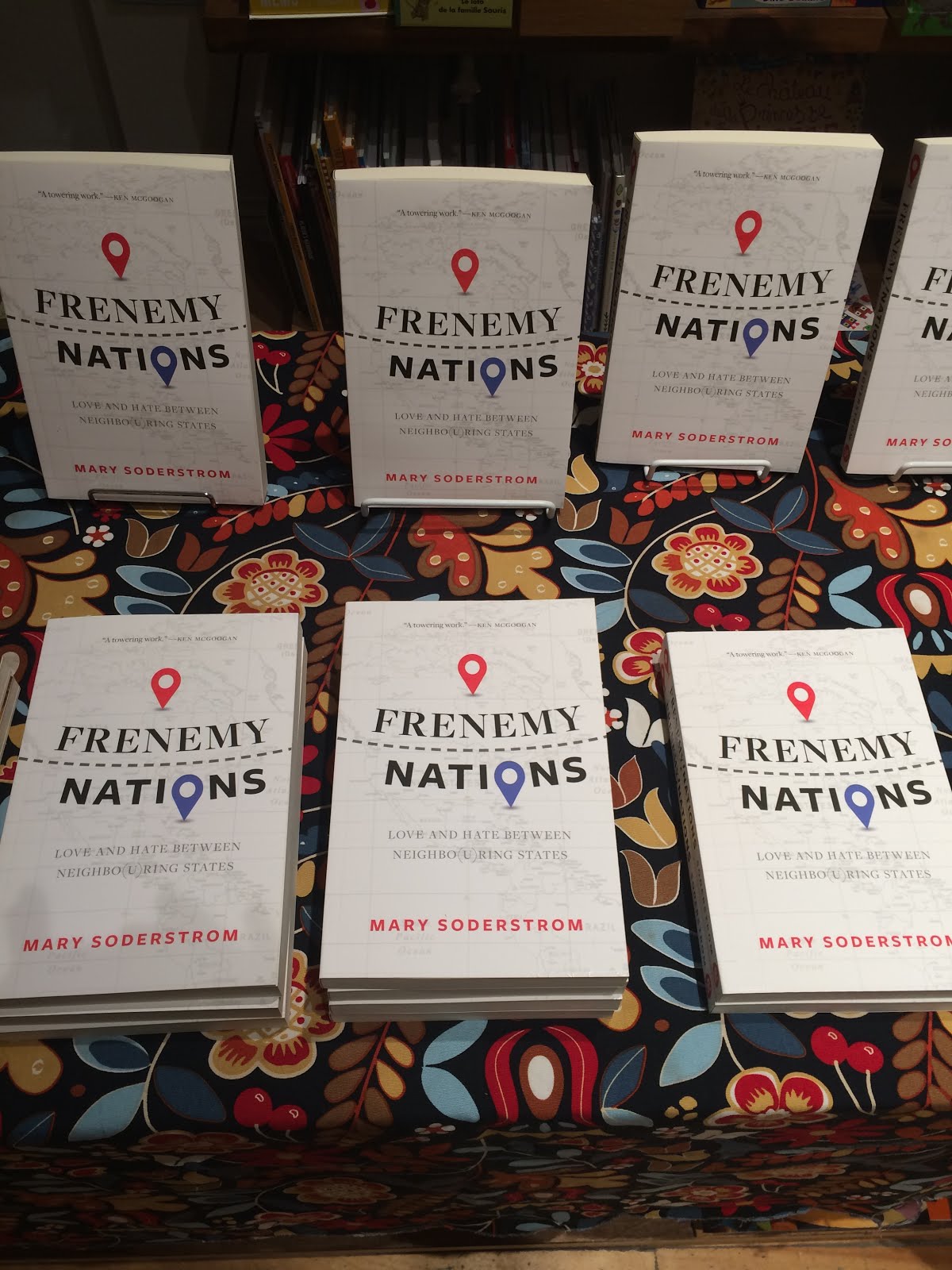 We had a great launch at Librairie Drawn & Quarterly in Montreal's currently very cool Mile End, followed by more celebrations elsewhere. This just in: Frenemy Nations is one of the Hill Times' 100 Best Non-fiction books of 2019

Will that woman ever shut up?

The topic for a Walrus Talk in September was "Boundaries" and I held forth. (They're kind of like the Canadian version of Ted Talks.)